SPC Vision has enabled both a large number of measurement and inspection stages to be removed and empowered the operators to achieve consistently high standards. It has really helped us achieve standard times and is already improving our profitability.

Safran Helicopter Engines specialises in the manufacture of complex mechanical assemblies for the aerospace industry and the maintenance, repair and overhaul (MRO) of small/medium size gas turbines. The company forms part of the global group of SAFRAN, whose subsidiary companies are located in over 30 countries around the world and who employ over 61,000 staff.

Infodream’s SPC Vision was selected by Safran Helicopter Engines after a 3 month trial period, to facilitate their key lean manufacturing project called ‘Self Inspection’. The project’s initial objective was to re-engineer the production inspection process to increase its efficiency and effectiveness. The project was no small task requiring a major cultural change and new ways of shop floor working. 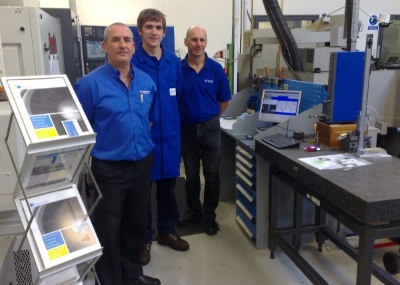 Prior to the project, Safran Helicopter Engines’ products were inspected several times during the manufacturing process. Each inspection step was conducted in isolation, often repeating measurements from previous steps. Additionally, each product underwent a thorough final inspection where the part was either passed and a certification report generated or failed and the required action taken. Undertaking the final inspection at the end of the process also meant that non-conforming products were sometimes not detected until this stage of the process, by which time much value has been added through each manufacturing step resulting in much higher scrap and rework costs.

The products are now inspected at the point of manufacture, and the measurement data is analysed real time and stored on a central database. Previously all measurements had been recorded manually but with the new integrated system, 95% of the measurements are now automatically captured by linking the CMM’s, Air gauges, Height gauges and digital callipers directly to SPC Vision.

The features measured at each inspection point are only those which are relevant to the associated manufacturing step so there is no duplication. With the products being inspected and data recorded at each step of the process, the final inspection has been eliminated. The product conformance report is generated automatically by SPC Vision at the end of the process. Non-conforming products are also detected much earlier in the process at the point of manufacture, reducing scrap, rework and processing costs. Additionally SPC Vision is used to monitor and control the process, so trends and early warning signs are detected and actions taken prior to manufacturing problems occurring.

Safran Helicopter Engines production manager Malcolm Smithers says that that “SPC Vision has enabled both a large number of measurement and inspection stages to be removed and empowered the operators to achieve consistently high standards. It has really helped us achieve standard times and is already improving our profitability.”

With phase 1 of the project almost complete, Safran Helicopter Engines are now looking to utilise the statistical process control (SPC) and analysis features provided by Infodream’s SPC Vision to monitor, control and improve machine and process performance. Malcolm says that “although this was outside the original scope of the project, there are clear benefits in using SPC on the shopfloor and we feel that this could really help us reduce waste and manufacturing failures in the future”

Safran Helicopter Engines have already began the next stage of the journey by sending all of their production operators on a ‘Variation Reduction & Statistical Process Control’ training workshop provided by Infodream. This proved to be a very good insight for the shopfloor personnel into what benefits could be delivered and what their role would be in this new way of working. Machining quality co-ordinator John Atkinson commented that the course had “ expelled a few myths and misconceptions surrounding SPC and has given me a much better understanding and confident view of how to apply it”

Register to our newsletter

We can now look forward to increased efficiency, and a huge saving in our time – which, put simply – is priceless. […]